Thanks to Aerocool Philippines for sending this review unit. The Aerocool Klaw comes in a plain brown cardboard box with basic outline of what the chassis offers on the front and the rear. While at the rear , you also find the specifications. There are a bit of bullet points on one side, while the other is mainly for logistics stickers. Upon opening the box, we see foam spacers hold the chassis in place while a huge plastic bag protects it from scratches. Along with it are a few zip ties, a bag of screws, and a remote control for the lighting and fans. The Aerocool Klaw is hefty out of the box. The design is unorthodox with the lights and LED strips on the front. Front facing the chassis, we are able to see the RGB frames envelop the pre-installed fans. In order to access, all you need to do is pull off the front cover. All the fans have five leds attached – two for the actual fan and three others to control the addressable RGBs. While at the rear, the chassis is quite traditional.  The metal frame feels quite flimsy – which is what OEM cases are normally known for. On the side, we see the panels are complete glass, though Aerocool has to opt out of putting a black framing on it resulting on the overall look being removed by the mounting and tooling holes of the case. The PSU bay at the rear enables mounting with a single set of standard screws, while right above it are the seven expansion slots. Though we prefer ones with thumbscrews for future adjustments, Aerocool chose to keep it simple by using break-out covers. At the very top, we find a stock fan embedded with RGB for exhaust. A magnetic dust filter covers the top air vent which also holds two fans or a 240mm radiator. With offset mounting holes, running into any issues with your motherboard shouldn’t be be present. The I/O has the standard power and reset buttons, audio plugs, as well as a USB 3.0 and two USB 2.0 ports. Underneath, we see a simple metal mesh for the PSU bay air vent.

To get into the interior, simply take out the thumbscrews on each end of the panel in place. Aerocool has a shroud to cover the PSU bay.

On the backside of the motherboard, you will find several openings for cable routing, but no grommets to hide the wires completely. Aerocool placed two metal 2.5″ trays alongside the fan/RGB control PCB here. Interestingly enough, you can not only control these elements with the remote and button on top of the chassis, but also the embedded buttons on the PCB itself.

In the front, you will find two 3.5″ drive trays underneath the shroud. While the whole cage can’t be removed, you should still have enough room here to install a thin 240 or 280 mm radiator as there are plenty of mounting possibilities. 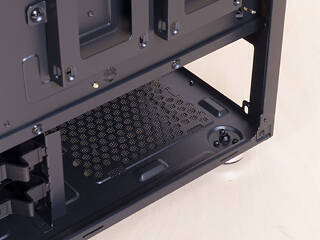 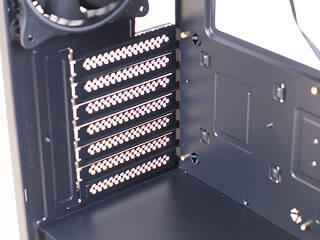 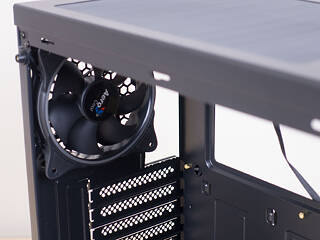 The PSU bay underneath the shroud is pretty straightforward. Above it are the seven basic expansion slots, and the previously mentioned 120 mm fan with a ring of embedded RGB LEDs. 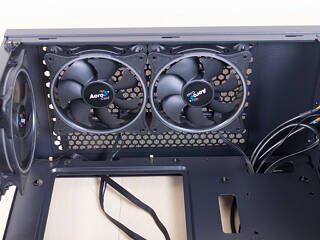 At the top, there are two additional RGB Exhaust fans for a total of three units within the Klaw.

Setting up the motherboard is done as normal but became quite a struggle due to the pre-installed fans and tight case dimensions. On the positive side, the AEROCOOL Klaw can easily handle bigger CPU coolers and hold the longest GPUs due to the fact that there are no drive bays on the front. The Aerocool Klaw goes for a different approach in terms of the implementation of RGB. It comes with 3 fans equipped with addressable RGB and to top it all off, the front uses the three strips of addressable lighting. Adding to that, installation of more fans or updaring to liquid custom set up is easy due to the number of vents inside the Aerocool Klaw. They managed to include dust filters on top and a metal shround inside.

Aerocool had to churn down a bit to make it affordable at the price of PHP 3,950, by opting for a case frame to try hiding some entry-level elements underneath. One of the biggest struggles we facesd was fitting the PSU. On top of all that, the I/O ports are outdated with two USB 2.0, but only a single USB 3.0 port. Though a lot of the cases now are establishing themselves with USB 3.0 considering motherboards do the same.